It is estimated that currently 1.5 billion people speak English, making it the most studied foreign language worldwide. Although the number of English speakers in South America is growing considerably, there still remains huge scope to extend these figures. For Colombia specifically, a country with a difficult and very recent past, education has become an important pillar on the country’s road to continued economic growth and political stability. Since the early 2000s there has been a focus on creating a standardised education system, with the overarching aim of leading to a better-educated, English-speaking workforce. 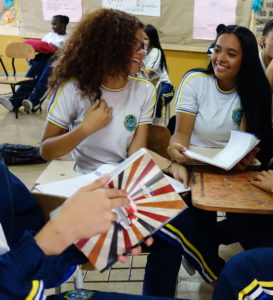 There has been recognition that learning English offers children more opportunities in the future – making them stronger candidates for further education and improving their general employability. The National Bilingual Programme in Colombia can be traced back to its launch in 2004. However, English language acquisition gained particular traction under President Juan Manuel Santos as part of his National Development Plan 2014-2018 called ‘Todos por un nuevo pais’ – ‘All for a new country’.

“In a survey of over 1000 people when asked why they chose to study English, 48% stated that it was for university and 47% highlighted the importance of English for improved employment prospects.”

Colombian education policies have always had common obstacles, including a lack of teachers, insufficiently trained teachers, a lack of material and importantly insufficient budgets. This was addressed and as of 2017, the figures really changed, with an education expenditure of US$11 billion with continuous requests toward congress for more. The programme has differed heavily from any of its predecessors, establishing significant longevity and aiming to address language needs across all ages.

“Objectives of the programme can be translated from Spanish: ‘To have citizens who are capable of communicating in English, in order to be able to insert the country within processes of universal communication, within the global economy, and cultural openness, through [the adopting of] internationally comparable standards.’” 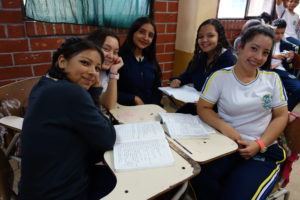 The programme has been innovative in its approach to addressing the English language needs of its population and created the ‘Formadores Nativos Extranjeros’ project. This programme has brought native speakers to public-schools (non-fee paying) nationwide to support English teachers and aid English language development. This was never going to be a simple task given that Colombia has over 60 indigenous languages and huge levels of economic disparity across the country – inclusiveness is key. The ‘Formadores Nativos Extranjeros’ programme is how all of The Bright Kites Foundation trustees came to love Colombia and propelled our desire to help children on their path to second language acquisition. We believe that young people are important leaders of change and we want to develop English language ambassadors to continue the programme’s good work.

Babbel (2017) How many people speak English and where is it spoken? Babbel Magazine

British Council (2015) English in Colombia: an examination of policy, perceptions and influencing factors